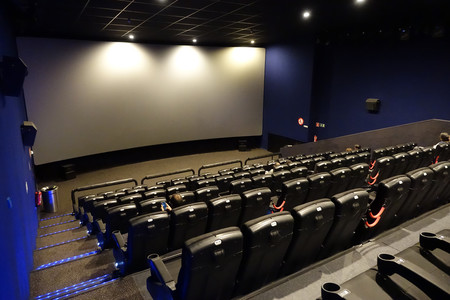 In general, most of them tend to be movies projected in 3D that you will have to watch with their corresponding polarized glasses. But beyond the fact that the image seems to come out of the screen, there are all kinds of sensory effects that aim to take you fully into the film as if you were the protagonist and «suffer» the same sensations as him. To do this, and following the rules that we will explain later, we must sit correctly and rest our feet on the footrest without moving from there.
For example, in Matrix you would notice every blow received by Neo with continuous blows on the back of your seat or vibrations, so it is not recommended for people with back problems if you are going to watch a movie in which there are blows and fights in every scene. You will also notice the movement, as the seats are able to move up or down or sideways. They can tilt all the way so that you feel the same vertigo as the protagonist at that moment. Or they can shake. You will also feel the rain on your face coming off the back of the seat although it will hardly get you wet but you will feel the humidity. In the case of rain, Kinépolis movie theaters allow you to deactivate it with a button on the armrest. If you don’t want to get wet, just press it. However, the whole experience encourages you to try to feel the rain on your face, it is light and hardly bothersome.

Competition for monopolizing our leisure time is increasingly intense. Video-on-demand platforms have managed in a relatively short time to carve out a very solid niche in our daily lives, and this reality inevitably makes things a little more difficult for other forms of entertainment. No doubt this is one of the reasons why some of the companies that manage movie theaters are reimagining their services with the aim of making them more attractive to moviegoers.
Cinema is, above all, image and sound, two vehicles with the extraordinary capacity to allow us to live any story and transmit emotions with overflowing intensity, provided, of course, that they are used correctly. Everything else, such as the seats, the sensory effects or the popcorn, is all very well, and can enhance our experience, but if the image and sound fail, our enjoyment will inevitably be ruined.
The Kinepolis facilities in Ciudad de la imagen, in the outskirts of Madrid, have a room, room 6, which has a laser projector manufactured by Barco with 4K resolution and fantastic image quality. I have been able to see it in action several times and its level of detail and contrast are outstanding. Honestly, I do not know the exact characteristics of the projector installed in the 4DX room of this complex, but I think it is not as advanced as the laser device in room 6. Even so, its level of detail is very high, its contrast is at the height of what we can expect to find in a reference cinema and its colorimetry is close to that of the laser projector with which it coexists in this same complex.